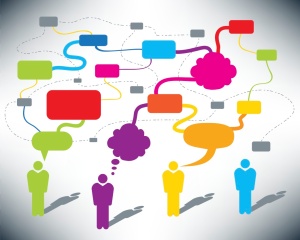 *The authors received the BVPA Publication Award for their article in 2014.

Getting a foot in the government’s door is one of the core challenges for interest groups to successfully influence public policy. While outside lobbying and media strategies are certainly important, direct access to policymakers seems to count most in the exercise of influence. The access interest groups enjoy is often conceptualized as a mutually beneficial exchange between public officials and interest groups in which the transmission of policy relevant information has a central place. Interest groups exchange technical expertise and political information about their constituencies’ support in return for access to the policy process, be it control over policy outcomes or the ability to monitor information on the policy process. Policy officials are open to the information interest groups supply, because they face limited capabilities in terms of time, resources and agenda space. Yet, because of their limited capabilities and the transaction costs associated with interactions with interest groups, policymakers cannot exchange resources with every individual interest group. A large number of interest groups will rarely, if ever, gain direct access to policymakers. This creates a strong incentive for interest groups to strategize their attempts to access policymakers as efficiently and effectively as possible. More to the point, when transaction costs are high, joining forces and collectively aiming to impact policy may have strong added value. It is, indeed, well-established in the literature that forging coalitions is fundamentally geared to achieve lobby success. In the end, joining forces should yield substantial benefits compared to individual lobbying, including most notably gaining direct access to policymakers and the realizing favorable policy outcomes.

The main question we therefore aim to answer in the article we published recently in the Journal of Public Policy is whether the positions interest groups occupy within information exchange networks explain their access to policymakers. In particular, we seek to account for the fact that many interest groups act through coalitions in order to seek influence, and that organizations often lobby in flocks or monitor and mimic others when selecting the issues on which to spend political resources.

The transaction costs involved in political exchanges, as well as the importance of having regular exchanges with policymakers, imply that interest groups seek to optimize their access by establishing an organizational form that helps them to supply resources, in particular, specialized information and expertise. The ability to produce and supply such high quality expertise is often explained by organizational resources. Not surprisingly, then, organizational features such as material resources, staff size or the type of interests represented are often used as variables predicting the extent to which interest groups gain access.

Nonetheless, we demonstrate that the overall propensity of interest groups to join coalitions and the social position they occupy in the inter-organizational context – the ties that bind interest groups to each other – is of a key importance. It helps groups to acquire high quality expertise and political information and improves their access to public officials. This explanation strongly builds on Granovetter’s weak-tie argument (1973) and the application of Granovetter’s insights by Carpenter and colleagues to explain interest group access to public agencies in US health care policymaking.[1] Granovetter argued that the strength of ties – which is a combination of the amount of invested time, emotional intensity, intimacy and reciprocal services – relates to the overall capacity of a network to diffuse knowledge, enhance social mobility and/or ensure social cohesion. Strong ties refer to intense connections between like-minded actors, while weak ties are more superficial ties held between distant acquaintances. Weak ties are important for spreading knowledge and information across a network, as they potentially build bridges between distant actors that would otherwise remain unconnected. The ‘strength of weak ties’ argument implies that ties with distant acquaintances are of greater informational value than strong ties within closely-knit social circles. Put another way, organizations that build bridges with groups outside their coalition are more likely to come across new information. In contrast, those who rely mostly on their close friends are more likely to hear the same story repeatedly.

The two main hypotheses we test hold that a brokerage position (a central position in an information exchange network) and a bridging position (a position that connects otherwise isolated networks of interest groups) have strong added value for individual interest groups. Therefore, groups occupying such position should, all other things being equal, gain more access to policymakers.

Empirically, we first identify four distinct advocacy coalitions among Dutch interest groups in addition to organizations that are not part of a specific coalition: the sustainability coalition (environmental and sustainability interests), the development coalition (development and labour interests), the pro-growth coalition (market-oriented, economic growth interests) and the agri-food coalition (agricultural and food-industry interests). We use these categories of advocacy coalitions as a starting point for analysing the added value of coalition membership, namely a central position within a coalition (many ties with organizations within a coalition) and a bridging position (i.e. ties with actors from distinct coalitions).

We construct two indices that measure access to elected and non-elected officials, which are our two dependent variables. These indices sum up for each interest group the number of bureaucrats or politicians who indicated that they exchanged crucial information and/or collaborated with a specific interest group based on a predetermined list of stakeholders assembled via prior document analysis and expert-interviewing.

The figure below shows the variation in access among the four different coalitions we identified above. A first obvious conclusion is that, on average, being part of a coalition delivers much higher levels of policy access. Organizations that are not closely tied to one of the identified coalitions, mostly specialized business associations, are mentioned the least by elected and non-elected officials. 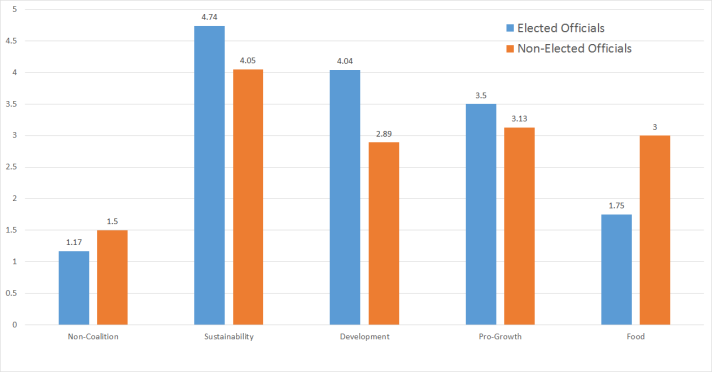 Overall, we demonstrate that the level of access an interest group enjoys depends on its social position within a coalition, more precisely its propensity to bridge distinct coalitions (through ties with organizations outside its coalition), as well as its ability to offer representative policy views (through a pivotal and central brokerage position within a coalition). Yet, occupying brokerage or bridging positions has distinct implications for gaining access to either politicians or bureaucrats. Bureaucrats favour bridging positions, most likely because of the informational advantage and the innovative policy information such positions carry, which are highly relevant for designing policy proposals. Politicians, on the other hand, seem to place greater value on the ability of groups to represent the views of a broader coalition; thus, a central position therein better explains access to politicians. Generally, however, coalition positions are of significant added value to gain access to political decision-making. Ties do indeed count.

The Journal of Public Policy (JPP) applies social science theories and concepts to significant political, economic and social issues and to the ways in which public policies are made. JPP publishes articles that cut across disciplines with authors coming from a variety of social science disciplines, and our authors come from several countries around the world, representing a diversity of perspectives and issues. The JPP blog was created with the intent of sharing information with scholars and other readers on social science theories and their implications for government as well as to be a forum through which its readers could share their thoughts on these topics through comments or guest blogposts. If you have published with us and are interested in submitting a blogpost, please email info@jpublicpolicy.com. View all posts by jpublicpolicy